Symptoms Of Computer RAM Damage and How to Fix Memory

Symptoms Of Computer RAM Damage and How to Fix Memory

Memory laptop is one of the important devices in the work of the computer as a whole by connecting together processor, motherboard, hard drive, power supply, screen, and RAM as a core device.

When one of the core devices has a problem, there will certainly be problems felt by the computer and cause different displays and indications according to the source. 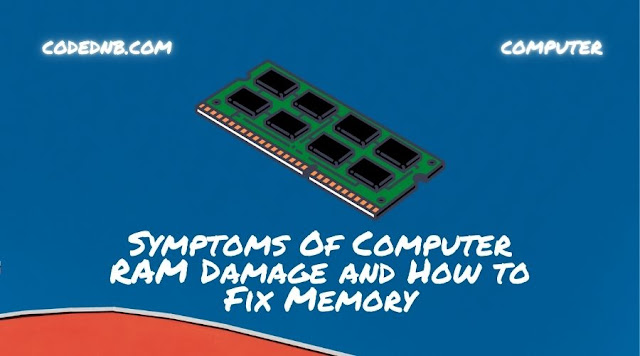 Laptop RAM is often associated with computer hardware that can improve the ability of Notebook to multitask, so many argue that the greater the memory capacity, the faster the Device can run Software or applications.

RAM stands for random access memory, which has the ability to quickly access random memory on a computer or gadget.

On a Laptop or mobile phone, memory is one type of memory that plays a very important role in processing information that occurs in the computer system when the ram is unreadable, it could be a sign of damage.

Memory's ability to access data randomly allows it to display data faster. In addition, when the device is turned on and the data has not been stored on the hard disk, memory can also store temporary data on the device.

Therefore, compared to other types of storage devices (such as hard drives, flash drives, or solid state drives), RAM can be said to be the fastest memory in a computer.

Ram function in general on Laptop or Mobile 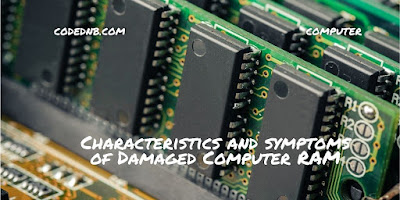 Characteristics of Computer RAM Damaged symptoms of laptop ram damage can be seen from some of the signs given and become a signal on the PC and notebook. below we will see what are the characteristics of memory damage more.

Open the application feels slowly, even open folder aja feel waiting for the queue at home eating padang?? It could be one of the characteristics that the memory has begun to break down.

As we know memory holds important in access and speed of data processing, therefore when memory has started to problem of course the computer will become noticeably slow.

It can also be a reference for you that indicates a problem with your computer's RAM. This is because Random Access Memory cannot help CPU performance, so cpu work becomes heavy and decreases laptop performance. Then what happens if the ram breaks down? let's see below.

The initial prediction is the possibility that the characteristic ram installed on your computer may have a crust on the copper pin underneath and considered laptop has been damaged.

With the existing crust will certainly complicate the reading of memory and eventually the computer will assume that there is a problem and may not detect your peripherals.

There are many questions about computer ram especially when the state of the computer is on and you think it is running slowly, try to check the memory can be as characteristic whether it is reduced or not detected by Windows. If this happens, then there is a problem with your Laptop's RAM.

If only your computer uses more than one memory slot installed will certainly be greater the total memory results that will be listed on your device.

Well if the installed does not match for example two pieces of RAM 4GB + 4GB = 8GB should be registered, but in fact that appears only 4GB is certainly characteristic of the damage to your computer memory.

When you use a Laptop and then Laptop Turns Itself Off, it may be typical of your computer's RAM error or memory feature is damaged.

This cannot be ignored because forced power outages can also damage various other computer components.

so it's a good idea to take immediate action to fix this Random Access Memory and if necessary replace it with new RAM so that the damage does not seep into other components.

How to turn on the computer normally is when pressed the power button will appear the boot and reading process of the motherboar device and successfully sync against other devices, but otherwise if your memory has started to error.

A distinctive feature that usually comes out is that the LED light on the laptop may remain, but the display remains blank and the screen is black. Be aware of the possibility of damage to your notebook memory.

This can also mean the hallmark that Random Access Memory on your computer is damaged, but you need to make sure that you can use the Blue Screen Viewer application to determine if your RAM is error or if there are other devices on your computer before taking any further action. which causes the screen to be blue.

If you hear a beep when your Laptop has just been turned on, it's possible that your computer's RAM is damaged.

However, first of all, check the beep code generated on the computer, because each BIOS has a different meaning for each beep code.

One of the characteristics and functions of the computer RAM to speed up the reading process performed on the device, With the damage that occurs will cause the computer to block applications to be accessed and of course the impact of not granted access reading and the use of the software to be considered error.

This happens because your RAM can't access the data because your Random Access Memory is experiencing an issue that makes it as abnormal as memory normally is.

Crashes occur when the application is not working as usual, and the information that will appear is Not Responding or Hang. Often feel your device that way.

When this often happens and hinders your computer activities, of course find out what the cause that characterizes the damaged ram.

Just pay attention to the above indications that can be one of the parameters and characteristics of your computer problem.

As a function that the RAM gives speed access in the processing of the computer, if the memory is damaged it will make the processor to order other devices to work harder to connect with memory.

When your computer feels hotter than usual, it could be a characteristic of memory problems or RAM signs installed on your laptop has been damaged.

This can also be a benchmark for you which indicates your Laptop's Random Access Memory has a problem. This occurs because the damaged computer RAM will not be able to perform commands and perform various performance of the processor,

this results in the work of your processor will certainly become heavier will result in reduced capabilities done by your computer. 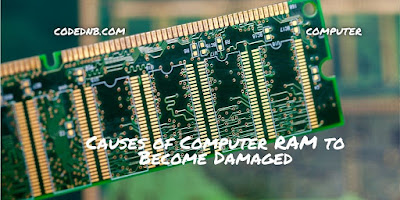 Everything must have its age and time, no exception on the computer RAM is broken. some of the above causes can be the reason for errors that occur in memory,

let's just take a look at more below yes,

Over time, overheating can damage your RAM and many other parts of your computer.

Not only heat from internal components, heat from adjacent components can also cause damage.

Before working on the inside of the computer, you should "ground" by touching the metal part on the laptop to help remove static.

Endless static electricity can damage many components of your computer, including RAM, hardrive and motherboard can be broken.

Causes Of Damage Due to Unstable Laptop Power Voltage in RAM

Voltage drop can cause a wide variety of problems with computer components, including RAM. This is because it uses a stabilizer so that the voltage received by the laptop is always stable.

Memory modules can have production defects that are not visible at the initial sign, but will get worse over time when the RAM slot is Damaged.

If you overclock any part of your computer incorrectly, this condition will result in overheating that can damage various components including your RAM.

When your Computer Ram is damaged the best advice is to replace it with a new unit that is appropriate and has the same characteristics as the currently installed mark on your device.

Do not buy best ram computer second whenever we do not know the history and usage hours of the memory you want to buy.

What about after the experiment above whether your memory has worked as usual?? or still issue a signal sign characteristic of damaged computer ram? If it is still problematic please try again the solution below yes.

Here explanation as a characteristic that can be known as a sign that the memory is problematic and the importance to routinely clean a laptop ram full.

by knowing the above signs you will be able to know what causes what happens that becomes a signal of the damage that is on the Computer RAM.

Hopefully the above article is useful as a sign and characteristic of a damaged computer ram that can be known as the cause and also the most appropriate repair.